On Sunday, Oct. 7, the Museum of Pop Culture unveiled a new statue to commemorate the life of Seattle’s own Chris Cornell. The late frontman for Soundgarden helped cement Seattle as a world-known music town in the ’90s, and now a bronze tribute to him—playing guitar with a raised arm—will reside on the sidewalk outside of MoPop as a reminder of his legacy.

Since this isn’t the first time a Seattle rock icon has been immortalized via statue, we thought we’d compare this new monument to others that came before in terms of accurately recreating the person’s likeness, capturing their rock spirit, whether the figure is in a prime location, and the ability to get a cool photo with the effigy. 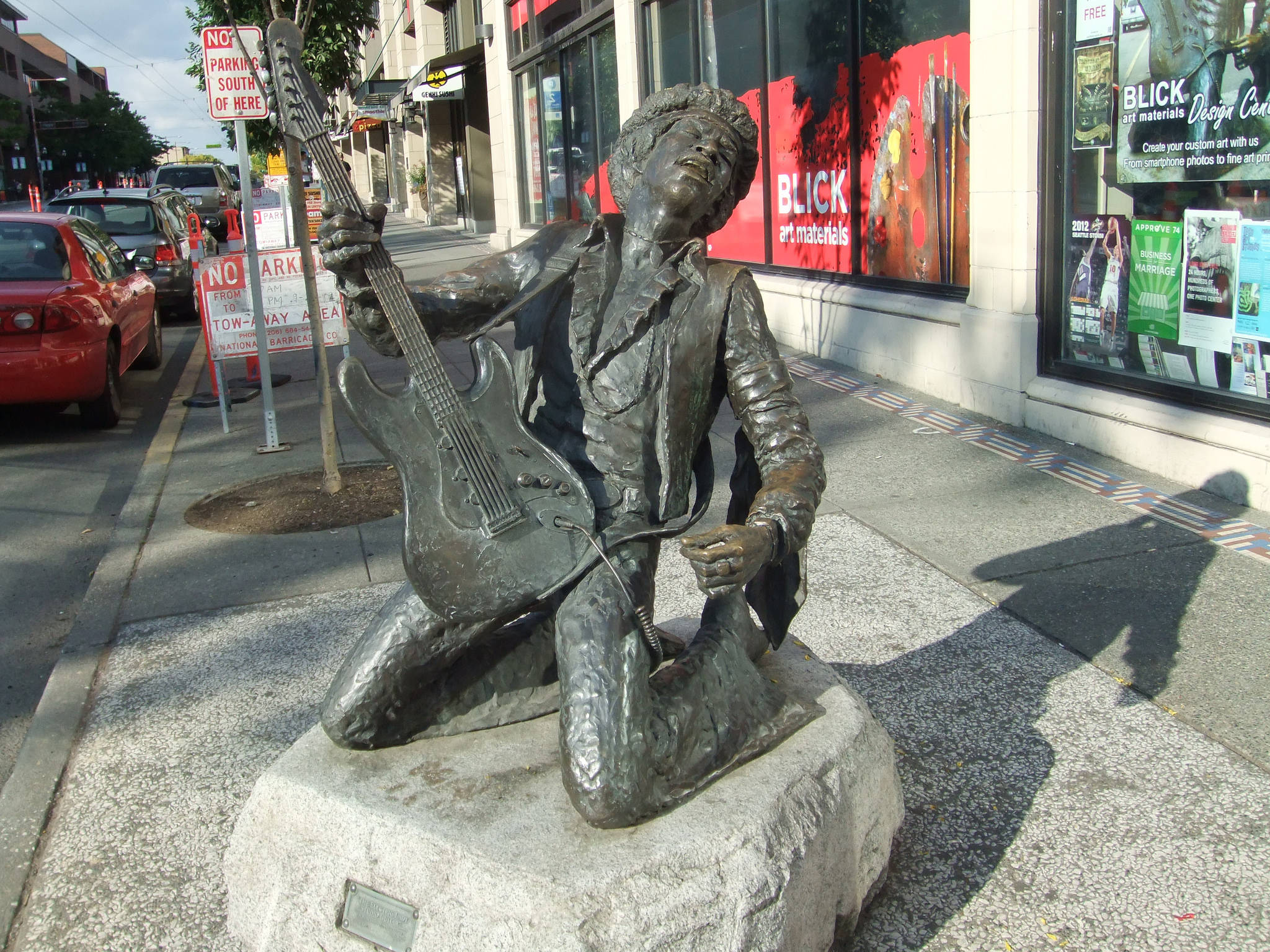 Since 1997, this bronze sculpture (commissioned by real-estate developer Mike Malone) has served as an instantly recognizable tribute to Seattle’s classic rock son. It might not have his facial features perfect (and it’s hard to get the volume of his hair right in bronze), but there’s no denying that it’s Hendrix even with just a cursory glance. The ruffled shirt and accurately depicted Fender Strat only add to the total package. Score: 8

There’s simply no denying this statue’s expressiveness. The wailing ecstasy of Hendrix’s guitar shredding—the kind that impulsively brought him to his knees—comes through instantly. It’s a statue that evokes sound. Just try looking at it and not hearing the wails of Hendrix’s fingers bending guitar strings in your brain. Score: 10

While it makes very little sense why the Hendrix statue is located at Broadway and Pine, it’s the perfect spot for garnering maximum attention. It’s a foot-traffic hotbed for both tourists and the bar-hopping late-night crowd. The statue’s random location actually works to its advantage in an Oh, cool, look at this way. Score: 9

Being out in the open on a public sidewalk means almost any posing is possible. You can get down on your knees and mimic Jimi or any number of other options. His compact position makes fitting everything in frame easier than a standing statue. The only knock is that the potential sidewalk backdrops (art store vs. traffic) leave a little to be desired. Score: 9

How do we put this nicely? This statue is bad. Since the Aberdeen Museum of History revealed it in 2014, there was pretty much universal agreement that it was bad. It looks sorta like the grunge legend, but the details are all generic (it could easily be a Jesus effigy with different clothes). Also, the guitar is almost laughably detail-free. It’s not Cristiano Ronaldo airport-statue bad, but still not the best effort. Score: 3

Those tears. Jesus Christ, those tears. Cobain was a troubled guy with deep-seated sadness, but depicting him with a tear running down his cheek as he plays guitar rings of a false sentimentality that he so clearly rejected. It’s anti-his spirit. Score: 1

Unfortunately, the Aberdeen Museum of History burned down in June (thankfully, no one was hurt). Not all of the artifacts were destroyed, but many were. We can only give an incomplete grade for now. Score: N/A

It’s tough to imagine taking a non-ironic photo with this hunk of stone. Score: 2 Considering the statue was commissioned and donated to MoPop by his wife, Vicky Cornell, one should expect this depiction of Chris to be handled with care. The flowing hair is accurately captured, but the figure also nails some little wardrobe details like his dog tags and boots. The biggest issue seems to be in the face, which lacks some of the sharpness of Cornell’s features. Honestly, the piece’s best detail work can probably be found in his Gibson guitar, which looks tremendous. Score: 7

When you think of Chris Cornell, what’s the first thing that comes to mind? (Hint: It’s not his guitar playing.) His voice. The man had the most formidable pipes in grunge music, so it seems odd to have an immortalized version of Cornell with his mouth closed. Sure it’s more difficult for the sculptor, but he should be bellowing, right? While this is an absurd statement to make about a chunk of unmoving bronze, this depiction of Cornell just feels slightly stiff. Score: 5

Having Cornell’s statue at MoPop makes a ton of sense. Seattle’s shiny shrine to music boasts eye-catching architecture, but it has lacked an exterior attraction to fit what goes on inside its walls. While its spot along 5th Avenue doesn’t garner the most foot traffic, it’s still part of the Seattle Center layout going forward. Score: 8

The raised-hand rock pose looks cool enough, but can’t really be mimicked without looking kinda silly (and would be impossible to frame properly in a selfie). Expect a lot of raised devil-horn fists or straight-up elevated waves. Score: 6

FINAL VERDICT: While the Cornell statue is a worthy edition to the Seattle rock-icon public-art sphere (light years better than the Cobain tribute), it still can’t quite match the pure rocking vibe of Hendrix’s monument.