Seattle’s First Hill is one of the most densely populated areas in the Pacific Northwest, but it has a problem. It severely lacks public open spaces, the type that are crucial to a healthy city life. And with real estate costs skyrocketing, buying land to create new parks in our densest urban areas isn’t feasible.

Considering the situation, the labyrinthine Freeway Park should be an oasis for First Hill residents, but the enduring fear of crime and general lack of awareness of its existence keep many people away. The Freeway Park Association and a community of the park’s devotees are working hard to change that.

Founded in 1993, the Freeway Park Association is a nonprofit that advocates for the park and its legacy. While it only has two staff members, it works closely with Seattle Parks Department and is supported by over 100 volunteer members. 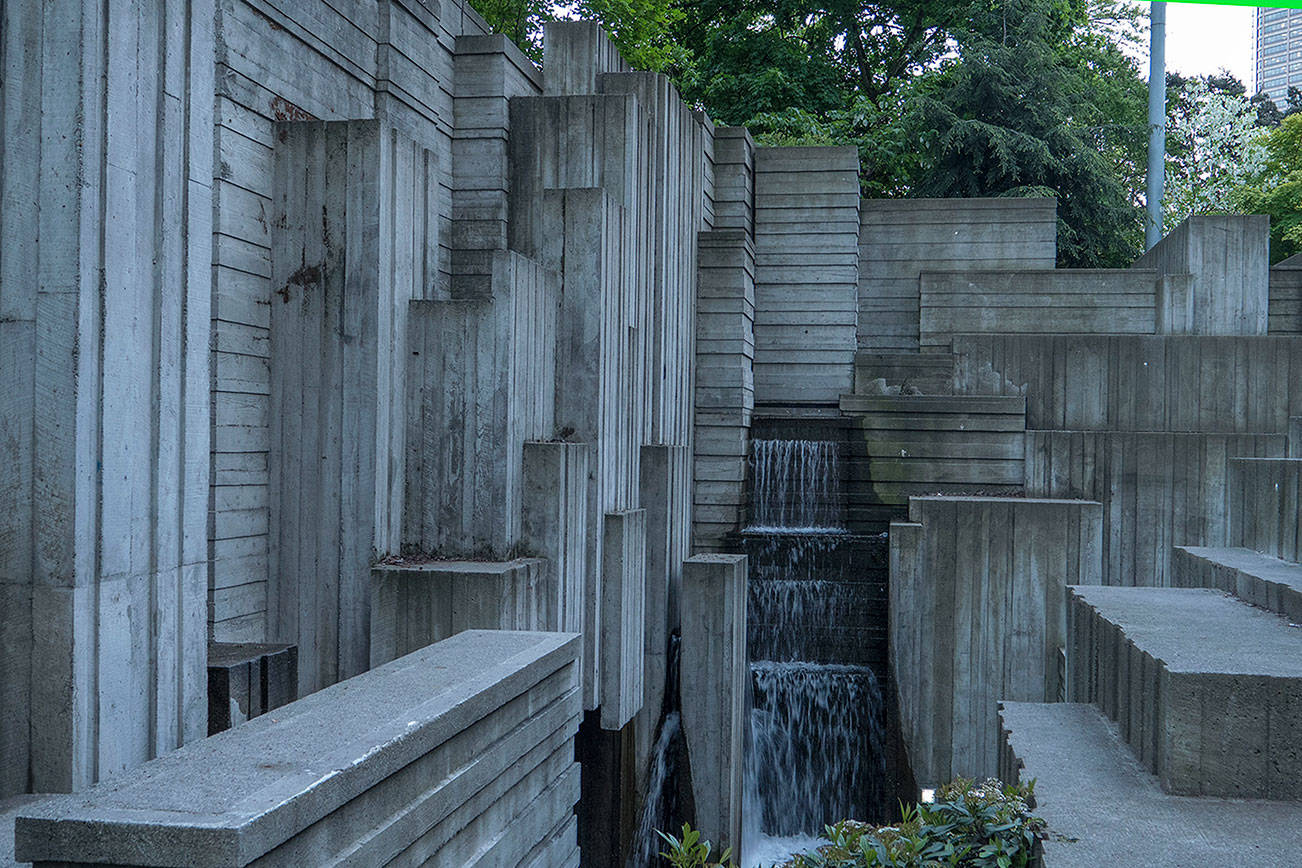 When Freeway Park opened to the public on July 4, 1976, people flocked to marvel at landscape architect Lawrence Halprin’s groundbreaking urban vision that fused together sharp concrete walls, geometric patches of grass, and an artificial waterfall. Halprin had built a new kind of public space with an edge and a purpose. It was the first of its kind to bridge areas of the city that were separated by the construction of freeways.

As time went on, the maze-like walkways and hidden corners started to attract the seedy side of the city, too. A string of violent crimes in the early 2000s damaged the park’s reputation. By then the park was nearing 30 years old, and overgrown greenery and certain outdated design elements didn’t help bring in a new generation to appreciate the park as more than just a commuter path.

“We need to do more work to remind people that the Freeway Park is here, and it’s beautiful,” Conklin says. As stewards of this space, the Freeway Park Association works on activation programs like community art events, fundraisers, and public meetings. A 2010 renovation focused on updating the trees and plants to brighten the area.

In 2017, the group worked with local landscape architecture firm Site Workshop to lead community workshops which crafted plans to improve the park by bringing in more pedestrian lighting, wayfinding, and restrooms, and repairing existing facilities. They also brainstormed plans for cafes, murals, and even a performance stage.

Earlier this year, the Freeway Park Association also received a public benefits package of $10 million from the Washington State Convention Center as part of the Community Package Coalition. This funding is a major addition to their efforts, because the city is incapable of assisting public spaces like the Freeway Park on their own. The money from the package will go toward future repair and enhancement projects.

For Conklin and others, bringing awareness to this unique space above I-5 is about community. Sure, Freeway Park has a place in history as a precedent-setting park in American architecture, but it’s also a space where the neighborhood can simply unwind.

“We need to put more resources towards our parks and open spaces,” says Conklin. “They’re open and free for everyone. They are equitable, democratic places where people can gather and experience nature together.”

Correction (May 14): The original version stated that the Freeway Park Association was supported by over 1,000 volunteers, but the number is actually over 100. Taking the stairs at Freeway Park. Photo by Keiko DeLuca