Friday, June 24—It’s been drizzling for a while, but now the sky is straight-up pissing on the roiling mass of human bodies spread across Cal Anderson Park. Sparse patches of umbrellas poke up from the crowd like mushrooms, but most people just get soaked. The ground squishes. Ink melts on petitions and homemade signs. Despite the downpour, thousands of celebrants remain, cheering when called upon by the booming voice from the stage in front of them.

Seattle Trans Pride, the annual celebration of people who don’t conform to conventional gender categories, has been going on for a couple years now, but this year is special—terribly so. Less than a month ago, a gunman killed 49 people and wounded 53 others at at a gay nightclub in Orlando. Queer Seattleites were still reeling from that massacre when a local trans person, Michael Volz, was attacked on Capitol Hill. Wednesday night, Volz was walking home from a concert to benefit the Orlando victims when a white man with a sparse beard walked up, said “Happy Pride!” and then proceeded to beat and choke Volz bloody and unconscious.

Suffice to say it’s been a rough month for the congregants at this year’s Trans Pride. Given the context, the stormy skies are appropriate—as is the fact that most of the crowd stays throughout the rain. These people are survivors. If they gave up easy, they wouldn’t have made it this long in the first place.

Police and private security crawl through the crowd and along the perimeter. A police SUV painted with rainbows is parked at the edge of the park. A four-man bomb squad with a sniffer dog wanders. The whole point of Pride, in a sense, is to taunt violent bigots—to say, ‘We’re here, we’re queer,’ etc. So today Seattle police are present in force, both here and across town to facilitate a visit from the President of the United States. That visit causes several elected officials to be late, but by the time it’s over, Trans Pride Seattle 2016 attendees include city councilmembers Kshama Sawant and M. Lorena González, as well as state senator Pramila Jayapal and Mayor Ed Murray.

“If you need to pee, then I encourage you to pee! It’s your right as a human!” cries the MC from the stage before giving directions to the restroom. “If you need to smoke a cigarette or a blunt, please go to 11th Avenue,” she says.

Liz McCarty and her boyfriend Tristan Crippen are hiding from the rain by huddling beneath a tree. Each holds a sign. Tristan’s says, “I’m trans, but I’m also a white man, so my experiences are super-privileged.” Liz’s says, “The power of visibility can never be underestimated—Margaret Cho.” As I interview them, McCarty and Crippen tilt their signs over my head in an effort to shield me from the rain.

“It’s really important to me that we show up and show solidarity with the community. A lot of us are friends or acquaintances of Michael [Volz], who was attacked,” says McCarty. “It’s pouring, it’s horrible, but everyone’s happy and we’re glad to be here.”

Both say they’d be comfortable calling the police in an emergency, something that isn’t always true among LGBT people. Crippen says he was impressed by the sensitivity with which Seattle police handled Volz’s case. “I personally like their response,” he says. “I think they’re super-respectful,” he says, noting that police stopped using the wrong pronoun for Volz when asked.

Gabriel Foster, director of the grant organization Trans Justice Funding Program, wasn’t the last speaker at Trans Pride on Friday. But his words to the audience make a nice epilogue to event:

To anyone who ever took a risk on loving themselves, I love you.

To anyone who ever felt completely and utterly alone, I love you.

To anyone who ever felt fabulously trans or queer, even if it was just for one moment, I love you.

To anyone who ever considered themselves an ally and actually showed up, I love you.

To anyone who ever questioned your worth, I love you.

To anyone who wanted to be here tonight but just couldn’t, I love you.

To everyone who’s ever been told, ‘You can’t’—goddammit, you can. And I love you.

He concludes with a call-and-response with the crowd, borrowed from the Black Lives Matter movement: 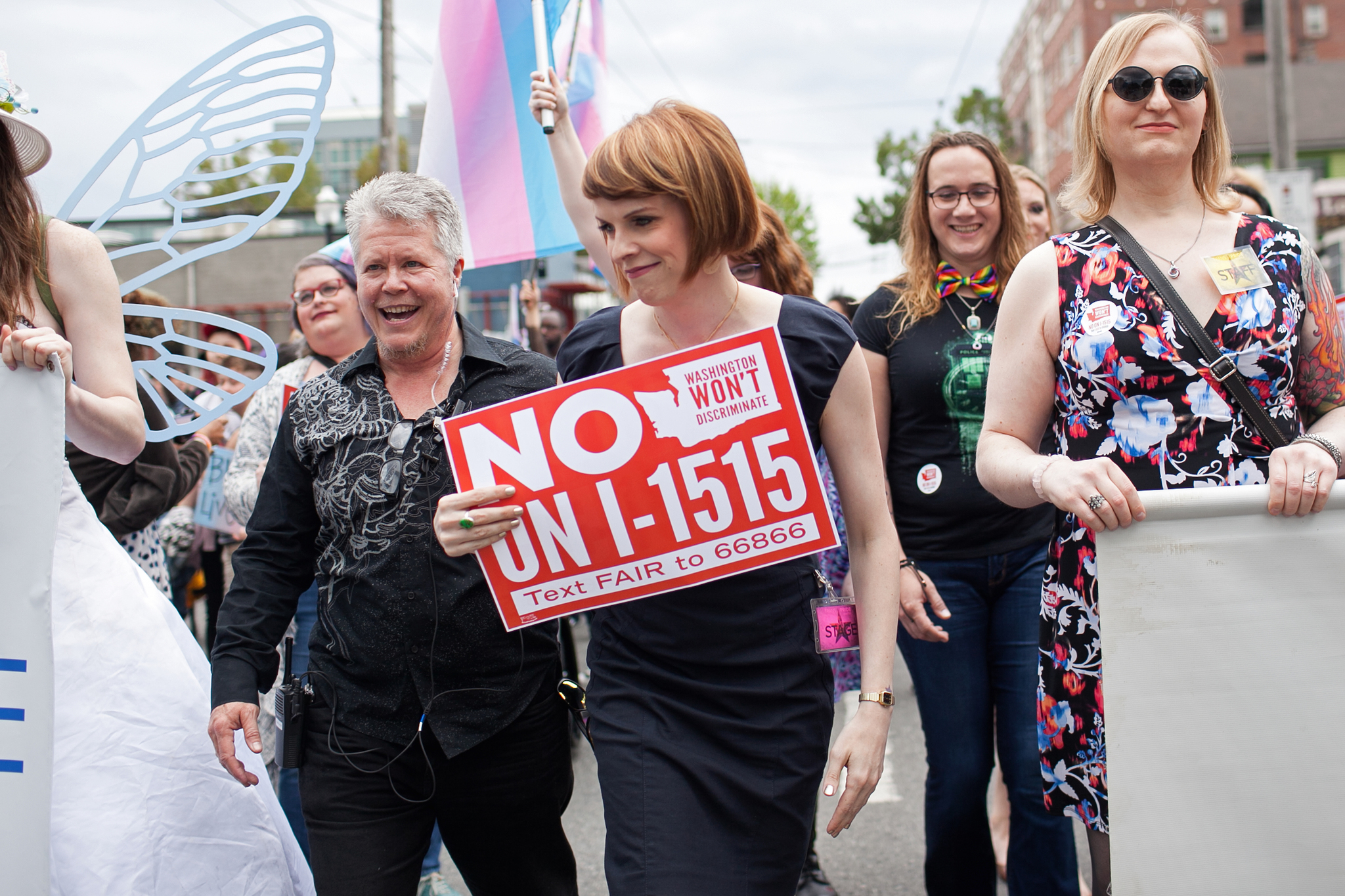