And the migrants kept coming.

The final caption of Jacob Lawrence’s The Migration Series, now on display at Seattle Art Museum, is an ellipsis. When he finished the series of 60 paintings in 1941, Lawrence knew the story was far from over. The migrants indeed kept coming for several decades.

Lawrence’s migrants were black laborers, leaving the Jim Crow South, beginning in the 1910s, for industrial jobs in the north, from St. Louis to Pittsburgh to New York. They left by train in droves, and train stations and tracks are the unifying motif of Lawrence’s series from start to finish. Between trains, we get glimpses of what the migrants were fleeing: intimidation, poverty, hunger, floods, the boll weevil. The one mention of lynchings is strangely calm: A lone figure hunches on a rock beneath a blue sky and a long branch, dangling an empty noose.

A year after it was completed, The Migration Series was acquired by the Museum of Modern Art (NYC) and the Phillips Collection (Washington, D.C.). The latter took the odd-numbered panels, the former the even ones. There was no rightful way to divide the series; splitting them evenly into a first and second half wouldn’t have helped. The first 30 panels focus on the South and the promise of a better life in the North. The second half of the series is more focused on what happened in the North, the hardships there that were, yet, in the final assessment, nevertheless more livable for the migrants.

Whoever had the first half would see their part end in a shack, where a family debates whether they should migrate north. It’s a dramatic, tense scene on its own, but a bit abrupt to end on. Meanwhile, Panel 31 is a minimalist depiction of tenement facades, laconically captioned, “The migrants found improved housing when they arrived north.” Not exactly the most dramatic starting point.

In short, it’s just a shame that the series was split in the first place, but it makes any reunion all the more momentous. For the first time in decades, MOMA and the Phillips have both arranged shows of The Migration Series in its entirety, newly conserved in a joint effort. Because it was already traveling, it was easier for SAM to request a stop in Seattle, Lawrence’s home for his final 30 years, where it is aptly displayed in the Gwendolyn Knight & Jacob Lawrence Gallery.

This year marks Lawrence’s centennial, so the timing feels especially apt. Then again, these works are never not timely. In the words of Patricia Junker, SAM’s Ann M. Barwick Curator of American Art, “This is a timeless story—the human story. It’s happening everywhere.”

When Lawrence painted The Migration Series, he was adapting certain artistic modes and avoiding others. When he was developing what he called “dynamic cubism,” Lawrence was taking cues as much from German Expressionists and modern graphic design as from Braque and Picasso. He skews, flattens, and tilts the perspective of spaces. Depicted in crowds, the migrants are reduced to silhouettes, whose flesh and clothing are blocks of color, anonymous yet distinct. 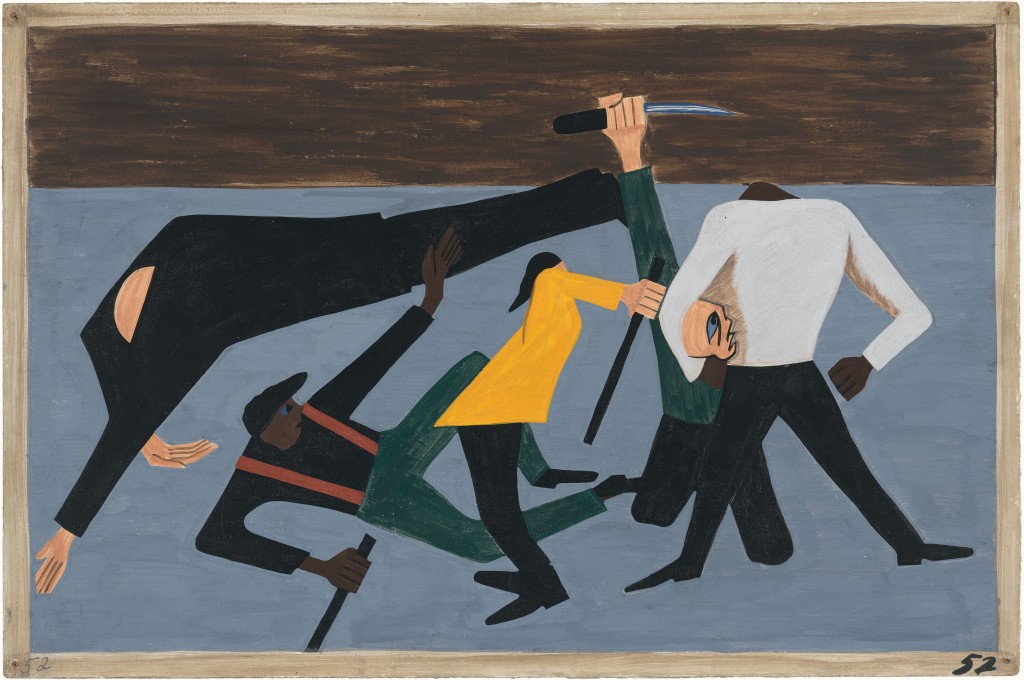 Lawrence oscillates between dynamic scenes and tableaux of intense confinement. There is the literal confinement of would-be migrants being detained in trucks by police to keep them from catching their trains north, the bars on the ticket booths and jail cells. Then there is the visual claustrophobia in Panels 46–48, showing the oppressively tight quarters of labor camps and tenements. The more active scenes do not necessarily paint a rosier picture: Panels 50–52 depict race riots and bombings of black homes in the North, where the migrants were often unwittingly brought in as cheap labor to break union strikes.

But then comes Panel 58, where three girls in a row write the numerals 2, 3, and 4 on a chalkboard. The caption remarks on improved educational opportunities in the North, and the simplified forms almost make it look as if the girls are holding numerals aloft triumphantly. It’s a brilliant composition that conveys advancement and progress without distorting or abstracting the real-world experience that inspired it.

This simplicity of form may have also been a result of Lawrence’s need to produce so many works quite rapidly. “It was a very ambitious undertaking,” remarks Junker. “It’s a big story to tell in 60 panels. You have to talk about the economy of the South, the economy of the North, industry, farming, and Jim Crow laws.”

Lawrence had a knack for maximizing a message in emblematic forms, and the popularity of murals and sequential art at the time made his visual storytelling especially familiar for audiences. Before he made The Migration Series, he created sequences based on the lives of Frederick Douglass and Harriet Tubman, but it was the series that catapulted him into the public eye.

He worked from copious notes he had taken during conversations with living migrants from the South. He included many compelling insights, but Lawrence wasn’t writing a definitive history. He flatly avoided the designation of “history painting.” For one, the story being told was contemporary. More fundamentally, his work was sociological and lyrical, not literal.

That’s what makes seeing only half of the panels so unpleasant. You get historical tidbits, but the cadence of the images and their accompanying captions is disrupted. (Imagine hearing your favorite song, but every other line is cut and the remainder is spliced together.)

Yet, because of Lawrence’s thorough probing, a viewer might still take away the facts of the situation: The migrants face death, privation, and oppression in their place of origin. They naturally go where a better life seems to be waiting. Some can’t escape because, as much as they are mistreated, those oppressing them still need their labor. Those beckoning them away from home provide opportunities, but will also exploit them. Instead of directing their ire toward the exploitative leaders, those displaced by the new labor forces attack the migrant instead.

These dynamics should sound awfully familiar. Some particulars may change: The boll weevil may be replaced by drug cartels. Segregation may be cloaked in institutional biases. But the stories here are being played out across the globe, and the deep, humble compassion of Lawrence’s work should be seen by more people—especially those living in “sanctuary cities” that have yet to address the legacy of segregation and redlining around them, nor done much to stop the displacement of minorities in their midst. There is a lot of work to be done…